The widowed Diana, Lady Templeton and Jeremy, Marquess of Willingham are infamous among English high society as much for their sharp-tongued bickering as their flirtation. One evening, an argument at a ball turns into a serious wager: Jeremy will marry within the year or Diana will forfeit one hundred pounds. So shortly after, just before a fortnight-long house party at Elderwild, Jeremy’s country estate, Diana is shocked when Jeremy appears at her home with a very different kind of proposition.

After his latest mistress unfavorably criticized his skills in the bedroom, Jeremy is looking for reassurance, so he has gone to the only woman he trusts to be totally truthful. He suggests that they embark on a brief affair while at the house party—Jeremy can receive an honest critique of his bedroom skills and widowed Diana can use the gossip to signal to other gentlemen that she is interested in taking a lover.

Diana thinks taking him up on his counter-proposal can only help her win her wager. With her in the bedroom and Jeremy’s marriage-minded grandmother, the formidable Dowager Marchioness of Willingham, helping to find suitable matches among the eligible ladies at Elderwild, Diana is confident her victory is assured. But while they’re focused on winning wagers, they stand to lose their own hearts.

With Martha Waters’s signature “cheeky charm and wonderfully wry wit” (Booklist, starred review), To Love and to Loathe is another clever and delightful historical rom-com that is perfect for fans of Christina Lauren and Evie Dunmore.

Sometimes there’s a danger to requesting ARCs. For example, I requested To Love and To Loath while I was looking for historical romance to satisfy my craving after watching “Bridgerton.” By the time my ARC came in, I had read three historical romances and been disappointed by all of them (if you want to read more on what I have to say about that, you can check out this post). So I was thinking that my issues might apply to the genre as a whole, and I was regretting having to read another one to keep my NetGalley ratio up.

But boy am I glad I was wrong.

To Love and To Loath features the witty, widowed Lady Diana Templeton and her ongoing bickering with Jeremy, Marquess of Willingham. First, Diana bets Jeremy that he will be married within the year. Then, Jeremy comes to Diana with a proposition. He needs some assurance on his…bedroom skills. He proposes they embark on a short affair. But of course, nothing goes as planned as the two of them try not to lose their bet or their hearts.

I mean this in the absolute best way possible: this book read like Much Ado About Nothing fanfiction. Martha Waters perfectly captured a Beatrice and Benedick style relationship based on bickering to hide true feelings. Enemies to lovers where it’s not really enemies to lovers, they just argue and antagonize each other because they actually like the other one but don’t want to even admit it to themselves? It’s absolute gold. That is my ideal romance trope. It is exactly what I want to read. I adored it, and Martha Waters did it so well.

The romance and the plot were definitely well written, and overall I really enjoyed the book. The banter was amazing, and there was thankfully not an overabundance of smut. I absolutely devoured this book.

The reason I can’t bring myself to rate it five stars comes from a greater issue that I have with the historical romance genre: the politics. Or at least it’s a problem with white historical romance. It makes sense for the book to address the gender politics of the time. But all of it is so white-upper-class-feminism. Like, there’s a whole plot about Diana having to marry rich in order to not continue to be a burden to her relatives and about her having financial freedom as a widow, which will be retracted if she remarries. And like, I get all that and women shouldn’t be their husbands property, etc. However, there’s also this whole thing where she’s seen as benevolent for not firing her maid because her maid likes to talk back. It comes up multiple times where she’s like, “I should really fire her for talking to me that way, but I am weirdly attached to her and also don’t want to go through the hassle of finding another maid.” I mean the privilege is insane and glaringly obvious. It attempts to talk about class but only in a manner of dividing the middle class from wealthy, not ever mentioning lower classes even though they are right there serving them the whole time. And really there’s no reason Diana couldn’t have been a proponent of workers rights other than the author decided not to write her that way.

But like I said, I am a complete sucker for this exact type of romance, and it’s so hard to find it done well. So I will definitely be re-reading it, and if you enjoy historical romance or romantic banter, I would definitely recommend it.

I was provided an advanced reader’s copy in exchange for an honest review.

View all posts by Delaney 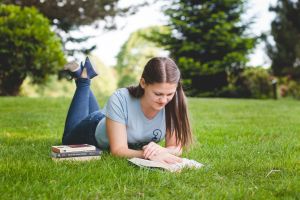 Hi, my name is Delaney (she/they) and I love books! I mostly post about contemporary, young adult, romance, and LGBTQ books. Please explore the blog and learn more about me on my “about” page!

Join 92 other subscribers
Buy me a Ko-fi